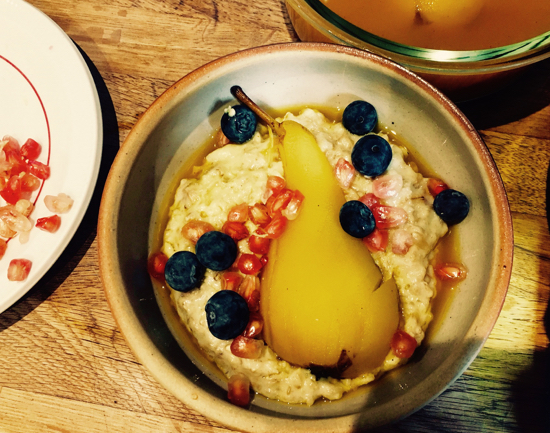 The November mornings in London have really begun to be quite chilly now (4 degrees C today!) so a warm breakfast is essential to get you out the door and keep your blood sugar balanced until lunch time.

Inspired by a version of this we ate recently at the Elder Press Cafe by the Thames in Hammersmith, we have attempted to re-create it at home and can attest it was both delicious and warming. The rich yellow colour of the turmeric infuses the outside layer of the pear's flesh and it's gentle spiced flavour is offset with the sweetness of the fruit.
Here's the recipe:-


Serves 2
3-4 pears (use the others on future mornings)
1 tbsp turmeric
1 tsp cinnamon
1 tbsp honey (more if you like it sweeter, or add later to porridge)
3-4 cloves
Juice of 1/2 lemon
1/2 pomegranate
handful of blueberries
drizzle of honey - optional

Peel the pears whole, combine the turmeric, cinnamon, cloves, lemon juice & honey in a small pot 1/2 filled with boiling water, add the pears, bring to simmer and leave covered for 15mins or until pears are easily pierced with a knife. Set aside to cool.

Once porridge is divided between two bowls, remove one pear from the liquid, halve and then place flat side down and run the knife through length ways to create thin slices without breaking through the pear, place 1/2 a pear in each bowl. Spoon over some of the poaching liquid and then garnish with pomegranate and blueberries. I actually added another 1/2 pear to my porridge, because I couldn't resist!

Keep the rest of the pears in the poaching liquid in a container in the fridge for future breakfasts, or gently reheat and serve as a pudding with a dollop of greek yoghurt or coconut yoghurt - yum! 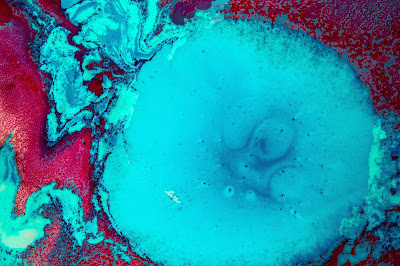 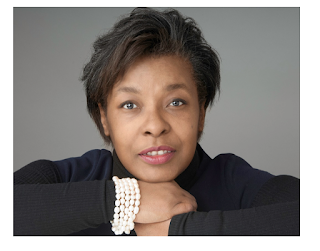